I am elated to announce the Eric DeCamps PURE MAGIC – A Performance of Contemporary Conjuring is going to sea!

The production directed by Bob Fitch, sails the Pacific Ocean with the PCAM Convention September 21 through 26, 2009 on Norwegian Cruise Lines` flagship,The Pearl.

It`s going to be a wonderful convention and I really hope you can join us. For more info: www.magicatsea.com

Award-Winning Magician Returns to The Metropolitan

For A Limited Engagement 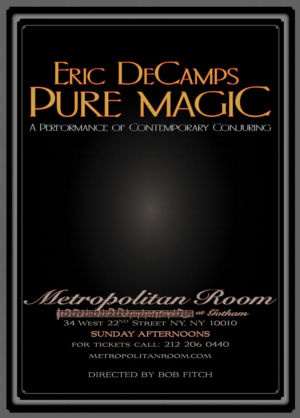 “I met Rene many years ago, and he taught me his prized trick with a tea cup and some bread crumbs,” says DeCamps. “Some time later after I mastered it, I performed it for him and moved him to  tears. That night he granted me permission to perform his most cherished mystery. Now it’s a favorite part of my show and always makes the audience gasp in amazement,” adds DeCamps.

Another showstopper is “The Spirit Box”, the closing piece of Eric’s performance, where unseen forces do seemingly impossible things.

The 75-minute show directed by MAC award winner Bob Fitch is scheduled to run Sunday afternoons at 4:00pm at the Metropolitan Room (34 West 22nd Street) from May 3 to June 28, 2009. For more information about Eric DeCamps: Pure Magic, call 212-206-0440. Click here for parking information. Click here for list of local restaurants.

SALUTE TO MAGIC & ERIC DECAMPS SPECIAL OFFER     Everyone who attends the 100th Anniversary Salute to Magic in New York City on May 16, 2009, will receive a special Eric DeCamps PURE MAGIC V.I.P. card. The regular cover price for Eric DeCamps PURE MAGIC – A Performance of Contemporary Conjuring is $ 25.00 but with the V.I.P. card you pay only $ 15.00 … a 40% savings!

This offer is good for one of the following Eric DeCamps PURE MAGIC performances: May 17, May 24 or May 31, 2009 at the Metropolitan Room located at 34 West 22nd Street. So make a reservation and when you arrive at the club present the V.I.P. card to the front desk host who will collect it and apply the discount. Try as we may we can’t make the 2-drink minimum disappear so that still applies.

If you don’t already have a ticket to the 100th Anniversary Salute to Magic, buy one now! The line up is incredible and this extra-added bonus makes it impossible not to go.

To find out more about Eric DeCamps PURE MAGIC – A Performance of Contemporary Conjuring please go to www.ericdecamps.com or contact the Metropolitan Room at 212-206-0440.

May is magic month here in New York City. So don’t let this wonderful opportunity pass you by!

Note: The discount offer is good for one person per card per performance and cannot be combined with any other offer.